We are working hard on the development of SurveyXacts analysis module for knowledge-sharing of the future. The first step has been a new way of generating graphs in SurveyXact which have provided the possibility of implementing some of the most demanded features - already now.

In a time where more data becomes available, you would think that it had become easier to make the right decisions in most situations. Unfortunately, this is not the case. With a large database that we now have available, there is a risk of "Information Overload". Meaning that the important parts of the collected data "drowns" in data that is irrelevant in the specific situation.

In SurveyXact we believe that knowledge-sharing of the future is about sharing knowledge with the right people, at the right time. The foundation of a large part of our system development in 2017 is based on this paradigm. This is, among other things, including a complete reconstruction of the underlying function generating graphs in SurveyXact.

This development will create the basis for knowledge-sharing of the future in SurveyXact - A future based on dashboards that can provide the exact knowledge needed in a specific moment. In the long term, these dashboards will be available as standard features in SurveyXact.

The underlying work in developments in 2017 has allowed for a number of updates that are already live in SurveyXact. Therefore, it is with great pleasure that we, already now, present the following new features in SurveyXacts analysis module.

1. A split of results on open variables

Used to split results based on answers in an open variable. Example: Split overall satisfaction in a text box in the "Background questionnaire" into the departments "North", "South", "East" and "West": 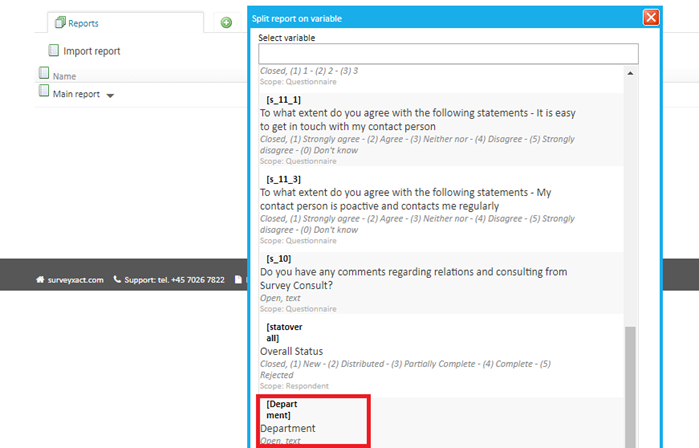 2. Show average in a "Stacked bar"
Used to show both average and response distribution in the same graph. Example:

Contains options such as "Hide" columns in observation analysis, expanded choice in colour for average graphs, "Hide" the total number of respondents amongst other things.

We hope you will enjoy the new features.

Questions regarding this news update?

Should you have any questions or comments regarding this information you are welcome to contact Senior Consultant Simon Lind directly.